How to Build Your Own Powerful Marketing Performance Tools

By losing our biggest family golf championship, I stumbled upon an insanely powerful, free platform that lets you build your own marketing performance tools.

The platform I'm referring to is the combination of Google Sheets and Google Apps Script. With it, I’ve managed to:

If you’ve got some coding background or are interested in learning to code, I’ve tried to incorporate everything you need to get started building your own marketing tools, including:

And if you’re not interested in building, I’ve also included links to some marketing-related add-ons that you can integrate into your Google Sheets.

Quick, the backstory ... (skip ahead)

In our family, golf is a way of life, and winners of our annual championship are revered and honored above all others at the regular potlucks. Posters are made. Shirts printed. Trophies engraved. The standard stuff.

Well, in 2010, I had miraculously put myself into a position to tie and force a sudden death playoff. Unfortunately, my brother managed to pull two shots out of his [LONG SERIES OF EXPLITIVES] to win by one stroke.

What I realized once I got home was that I added my own score wrong. We should have tied. For the next 74 hours, I aggressively wept in this position: 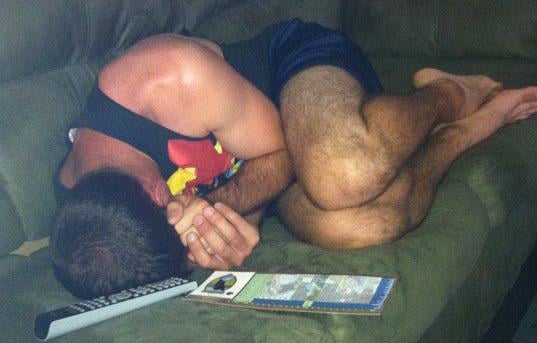 After pulling it together, I started looking for ways to automate the addition process, thereby removing any chance of messing up 3 + 7 again. This eventually led me to Google Sheets, which allows multiple people to simultaneously add their golf scores to the same sheet (scorecard), and it’s free.

But, I still needed a way to account for each player’s golf handicap, which led me to Google Apps Script. It was the answer to my arithmetic nightmare. With Apps Script, I could give my spreadsheet scorecard the brains I was lacking.

I’ve been playing around with Google Apps Script now for four years, and it has redefined many aspects of how PR 20/20 operates, including how we evaluate marketing campaign performance and even manage the agency.

What is Google Apps Scripts? 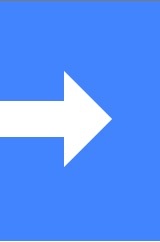 From Google: “Google Apps Script is a scripting language based on JavaScript that lets you do new and cool things with Google Apps like Docs, Sheets, and Forms. There's nothing to install — we give you a code editor right in your browser, and your scripts run on Google's servers.”

Let’s break down Google’s definition a bit and explain why you don’t need to be a developer to use it:

Don’t let Google’s description of Apps Scripts intimidate you. Once you get into it, it is a pretty straightforward way to start practicing and growing your coding skills, and create useful marketing tools in the process.

Speaking from experience, here are some of the marketing tools that are possible to build within Google sheets:

If you’re interested, consider subscribing to our blog as the plan is to draft some how-tos around building the above tools.

If you don’t have the time or interest in building your own marketing performance tools, you’re in luck. Google Sheets has an Add-Ons gallery with dozens of prebuilt programs you can add to any Sheet.

Tools relevant to the marketing world include:

Quick note: I’ve only personally used the Google Analytics add-on. It used to be a script you copied and pasted into your own Google Sheets, but Google adopted it, polished it up, updated it, and launched it as an Add-On. It's a very useful tool for pulling a series of metrics into a Google Sheet for later analysis.

How to Get Started Building Tools with Sheets and Apps Script 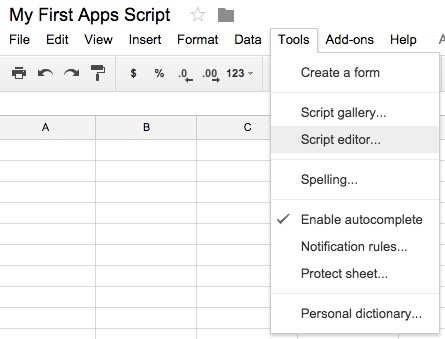 Below you’ll find detailed instructions on how to get started with Google Sheets and Google Apps Scripts. I’ll walk you through how to access the Script Editor, and then write a small program that pulls in data from a spreadsheet, processes it, and publishes it back to the spreadsheet.

Congratulations, here’s your code editor. Better yet, the start of your first program function is already waiting for you.

Instead of explaining each menu item, which could take a while, right now I’m only going to call attention to the three you’ll use most often.

Every program you’ll create will need to be saved and tested:

Saves the most current version of your script. 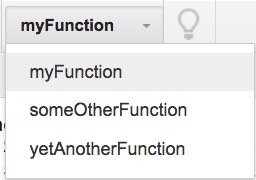 Select the function you want to run or test (you may eventually end up with dozens of functions).

As soon as you click the play button, you’ll see a yellow bar similar to the one below. This will indicate that the script is running. When done, the bar will read, “Finished Script.”

OK, now that that editor stuff is out of the way, create a new spreadsheet and add any number to cell A1. We’ll create a simple program that multiplies your number by 5, and then prints the answer in cell B2.

While this program may sound rather rudimentary, I’m using it more as a demonstration of how to get values from a spreadsheet into your Apps Script, and then send something back to the spreadsheet.

Every app script I’ve ever created includes all of the following elements.

Here’s the full program for reference. I’ll break down each line below. I’ve linked the Google methods (functions that can be performed on an object) used to Google’s own definitions for easy reference.

Only include the specific range of cells needed, so as not to chew up too much memory, which when compounded over your entire program can waste valuable milliseconds.

The most important thing to keep in mind when developing your programs is: you need to tell the program exactly which part of the spreadsheet you want to interact with, and that starts with defining things at the broadest level (spreadsheet) first and working down through each level to a specific cell or group of cells. Miss a step, and your computer will catch fire and melt.

One other quick note: the program above is written with each specific code instruction on its own line for clarity. This isn’t the best way to write code. Instead, you should try to consolidate instructions where possible.

In this case, you can attach Google methods to one another in one line to consolidate space. Below is an example of how to shorten this program.

The rule of thumb is: If you think you’ll need some part of your spreadsheet (i.e. sheet, row, cell) elsewhere in your program, save it to its own variable so you can easily reference it later. For example, I knew I’d need the “sheet” again at the end to print the value, so I saved it to its own variable.

For additional background, below is Google’s full reference documentation on each level of a spreadsheet. On each page, you’ll find all the different actions you can take with Apps Script. I haven’t used about 75% of this stuff, but the more you know about what’s possible, the easier your programs become to write.

If this was valuable and you’re interested in learning more, be sure to subscribe to our blog below. Over the next several months, I’ll be walking you through how to build a number of cool marketing performance tools. 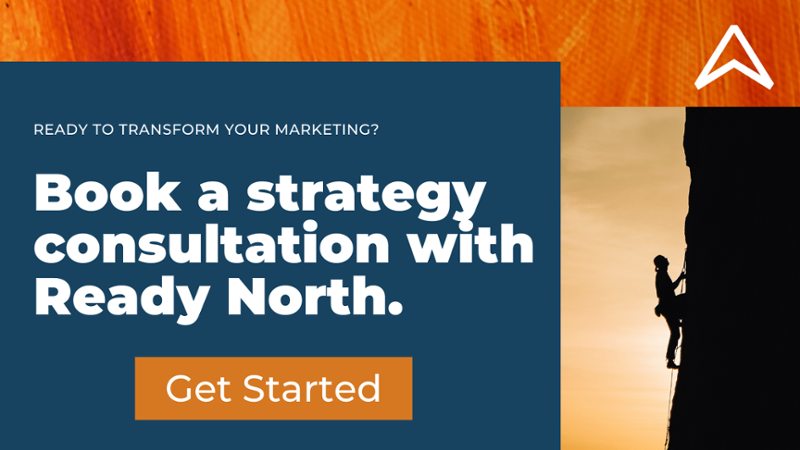 Keith Moehring is the vice president of strategic growth at PR 20/20. He joined the agency in July 2006, and is a 2004 graduate of the University of Toledo.

Reporting Made Easy: Why You Should Use Databox With Your HubSpot Account

The Road to MROI: The 5 Marketing Costs You Should Be Tracking