Do The Right Thing, Not All The Things: 3 Marketing Mantras To Follow

If you have online accounts, you’ve likely received an onslaught of communications about Heartbleed, a serious vulnerability in the popular OpenSSL cryptographic software library. The bug, which allows for the stealing of information normally protected by SSL/TLS encryption, was brought to light when almost simultaneously discovered by security firm Codenomicon (@CodenomiconLTD) and Google researcher Neel Mehta (@neelmehta).

(For more on Heartbleed, see the Codenomicon-created educational site and this CNET FAQ.)

But Heartbleed also offers important crisis communication lessons to marketers that are extremely applicable in a hyper-connected world where panic spreads like brush fire. Whatever the crisis, here's how to handle it.

Lesson 1: Time is of the Essence

Whether a security breach, product recall or other major concern, your reaction time is critical. Do not wait until the perfectly crafted response is complete or every piece of information has been gathered—act. 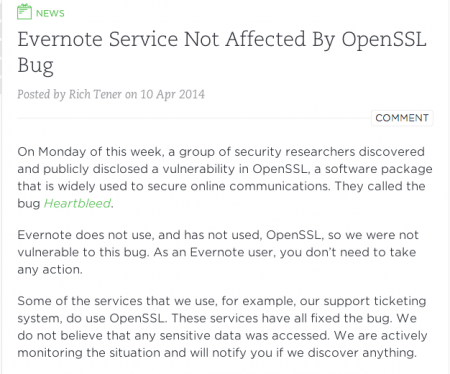 HubSpot's (@hubspot) 300-word post wasn't elaborate (and Evernote's was a mere 109—see above), but they got the job done. Both addressed the problem head-on, and gave customers clear and transparent insight into what the companies had learned, what they were doing to resolve the problem, and what steps (if any) recipients needed to take.

Lesson 2: Cover All Your Bases

Consumers have an ever-widening array of channels to learn about and engage with your company. And when trouble occurs, they'll turn to all of them. Leave no stone unturned: Communicate on every outlet available to you.

Cloud-based password manager LastPass (@LastPass) came out of this ordeal looking better than ever. The company sent an email to all its customers reassuring the security of LastPass and linking to a blog post with more information. 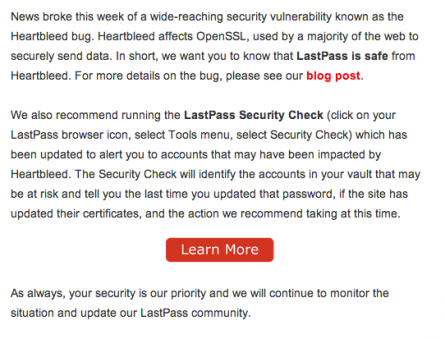 The blog post gave more detailed information on the breach itself, and what it means for LastPass users. LastPass used its Twitter account to drive users to the blog post, and to communicate updates.

But what really made LastPass stand out was the LastPass Heartbleed checker, a dedicated page that allows anyone—not just LastPass users—to enter a domain and see whether it was vulnerable to Heartbleed. It's this type of universal Youtility that cements customer loyalty and plants a seed in the minds of future prospects. Look for opportunities to turn a problem into an asset by providing unique value to those affected.

When communicating with stakeholders, take a page out of the journalism handbook and think inverted pyramid. It's tempting to lead with apologies or assurance, but what people want is answers, and they want them now. Don't keep them guessing.

HubSpot and Evernote (@evernote) both took this route, making the bottom line the title of their posts.

When the takeaways are more complex, learn from Mashable's (@mashable) easy-to-digest chart summarizing the impact on top websites. The more proactive you can be in answering readers' top questions, the more confident they'll be in your ability to handle the situation.

Lesson 4: Update As Needed, and Be On-Call for Questions

As important as it is to address concerns early, it's equally important to follow up. Update consumers as information is announced or a resolution is found, and make team members available to respond to questions, concerns and even complaints. LastPass timestamped updates to its initial blog post, demonstrating ongoing effort to resolve any issues. Buffer's post (@buffer) included a list of helpful resources for users wanting to learn more, and encouraged users to tweet the company with any follow-up questions.

Crisis communication strategy will and should be adapted based on the scenario, the severity and the audience it affects. But for marketers operating in an always-on world, one thing is certain: Every second counts.

Taylor Radey is the director of marketing and a senior consultant at PR 20/20. She joined the agency in April 2013 with a background in digital and content marketing. She is a 2009 graduate of the E.W. Scripps School of Journalism at Ohio University, where she received a Bachelor of Science in Journalism, with a focus in public relations. Full bio.