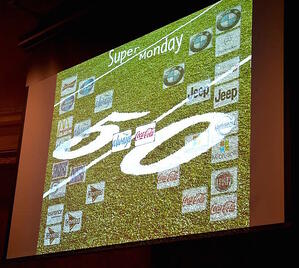 Last week was the annual Cleveland American Marketing Association Super Bowl Ad Review event. Held every year the day after the Super Bowl, attendees start with a 16-commercial bracket. Ads are watched, discussed and voted on until we get it down to our #1 Super Bowl ad.

This year’s panel included Jacquie Chakirelis (@Jchakirelis), senior digital consultant of Northeast Ohio Media Group; Jason Therrien (@JasonTherrien), president of thunder::tech; Jim Gough (@MarcusThomasCle), creative director of Marcus Thomas; and our own Paul Roetzer (@paulroetzer). Though this was a lackluster group of commercials, there was no lack of discussion on what worked well and who just missed the mark completely.

This year, the more serious ads seemed to have a bigger impact than the ads that focused on humor or big attention-getting spectacles. Ultimately, the Always (@always) “Like a Girl” spot narrowly beat out Coca-Cola’s (@cocacola) “#Makeithappy” ad for our favorite ad overall. Note: Coca-Cola has since suspended its campaign due to a Gawker prank.

Below is a recap of some of the trends we saw emerge or continue.

Lack of Calls To Action/Social Engagement

My biggest takeaway from this year was the lack of calls to action on the majority of the commercials. Why wouldn’t you use the exposure to expand the conversation past thirty seconds? Better yet, use the opportunity to build your audience. As Jeff Rohrs (@jkrohrs) points out in his annual Super Bowl commercial analysis, “61% of consumers planned to watch the Super Bowl with a smart phone in hand.” However, this year saw a decrease in the number of commercials that offered any email addresses, hashtags or social extension.

For the money that advertisers are spending, they need viewers to see more than just a logo at the end of the commercial. The ads need to work harder to engage consumers. Consumers are more mobile and social than ever and there’s no other event in which they pay such close attention to the ads. To not offer a platform to interact further is a waste of $4.5 million.

A few commercials addressed social awareness issues. Clearly, Always and Coca-Cola were winners with this group. The biggest loser was easily Nationwide (@Nationwide) with its “Make Safe Happen” ad, which told the story of fictional kid who died in a household accident. It was just too depressing for most viewers. Instead of spurring conversations about making your home safer, most dialogue centered on the appropriateness of the ad and how it went too far…not to mention that it completely overshadowed its second commercial with Mindy Kaling (@mindykaling) (which was actually pretty good).

Dads received a lot of love from Nissan (@NissanUSA) and Dove (@Dove), while McDonald’s (@McDonalds) focused on moving forward with its “Love” theme. McDonald’s is now offering random customers the option to “pay with lovin’.” They may have to call their mom, hug their kids, do a dance, etc. One of the funniest comments of the event was that we’d hate to be the next person in line, especially if you’re in a hurry.

Anheuser-Busch (@AnheuserBusch) offered a sequel to its “Best Buds” puppy commercial from last year. Not surprisingly, this was a big hit. The ad showed the puppy lost and being threatened by a wolf. The Budweiser Clydesdales came to save the day. The brand also continued its Bud Light (@budlight) #Upforwhatever series started in 2014. This year saw a live Pac-Man game that may be the best “whatever” the Bud Light team has put together.

Snickers (@SNICKERS) offered the latest in its “You’re Not You” series with one of its funniest ads yet. This one featured the Brady Bunch, except Danny Trejo (with an ax!) as Marcia and Steve Buscemi as Jan.

The trend continued this year for brands to release their ads online early. Research showed that commercials released online before the Super Bowl last year had 2.5 times more views.

There are risks, though. GoDaddy (@GoDaddy) released its puppy commercial that mimicked the lost dog from Anheuser Busch. However, in this version, the puppy finds its way home only to be immediately sent to an online buyer. This caused outrage as it looked as if GoDaddy was supporting puppy mills. There was enough social media outcry, and an online petition, that they pulled the ad.

On the positive side, Newcastle Brown Ale (@Newcastle) again pulled off a brilliant online promotion with “Band of Brands”. The goal was to convince enough brands to partner on a Super Bowl ad to buy an ad and split it among all of them. Newcastle was able to get 37 brands to join in! Although, the ad was only seen on TV regionally in Palm Springs. Everyone else can watch it online. The Newcastle team is already teasing its 2016 ad!

As always, this was one of the best AMA events of the year. They do a great job of putting together a format that spurs discussion. I can’t wait for next year’s Super Bowl and a fresh batch of commercials.

What was your favorite commercial this year? Tell us in the comments below.

Jeremy Bednarski is a senior consultant at PR 20/20. He joined the agency in December 2014 and earned his MBA from Cleveland State University with a focus in marketing. Full bio.