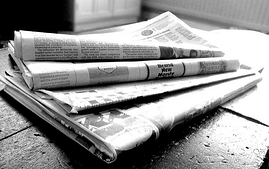 Top marketing news, articles and tips from the first week of July 2012.

Sometimes we all need a bit of a reality check to

break old habits. And, reverting back to the same old mediocre marketing campaign can easily become one of those habits. Jonathan Mead (@jonathanmead) tells it how it is: if your campaign failed, it’s probably because you played it safe.

Take note of Mead’s recommendations for a revolutionary marketing strategy:

In any marketing campaign, it’s important to prove value and validate your efforts. But, unrealistic expectations and the wrong approach to ROI can actually be inhibiting. Vic Drabicky (@vicdrabicky) shares what marketers need to keep in mind to interpret ROI the right way, and accelerate brand growth.

Drabicky says we mistakenly put the value on marketing, and not the customers behind it. How can you fix it?

Once you’ve mastered theses techniques for your overall marketing campaign, focus in on different components, such as calculating social media ROI. (Note: While the view here is simplistic, it offers a good place to start.)

Twitter’s plans to create a consistent user experience may have backfired, as criticisms of its decision to cut any non-affiliated, third-party apps continue to fly. Nick Bilton (@nickbilton) describes Twitter’s API eviction process as a “cacophony of confusion” for its users, and believes the result will be anything but consistent. Here are its faults:

Nova Spivack (@novaspivack) has also voiced his discontent with Twitter’s decision, along with an “everybody wins”-style solution to its API problem: free API access with intermittent ads shown on these apps, or premium API access that allows apps to opt-out of showing ads.

What are your thoughts on Twitter’s changes?